This past weekend I participated in a new cycling event, the Farm to Fork Fondo. The idea behind the event is to support local farms and farming organizations. Each rest stop on the ride was held at a different farm which featured treats made from the farms or other locally sourced items. Proceeds from the event would be donated to local farmers and organizations to help them with project and other causes like preserving the beautiful open space we all enjoy on our bicycles. This particular event was hosted in Orange County, NY, but there is a second event coming up in Vermont in two weeks. The event is put on by former pro Tyler Wren & Wrenegade Sports and major sponsors of the event are Colavita and Fine Cooking magazine so besides the bike rides there are other activities (dining, cooking classes) throughout the weekend, depending on what “package” you choose. There was also a Q&A session with the Colavita | Bianchi womens pro team the morning of the ride as well.  The OC event is hosted at Cedar Lakes Estates which hosts a whole mess of other off the bike activities as well.

At the OC event, there were several different routes to choose from; the Gran Fondo @ 94miles, the Medio Fondo @ 60 miles, the Piccolo Fondo @ 30 miles & the Ramble Ride @ 10 miles. I signed up for the Medio Fondo @ 60 miles with an estimated 3,700 feet of elevation gain. Since I haven’t been able to get in many long distance rides in this year I figured that was more than enough. Plus since the Cedar Lakes venue is basically on top of a mountain that meant a mountain top finish to the ride! Here you can see the elevation chart from Ride With GPS.

The weather report for the weekend was all over the place. First it was supposed to be a complete washout then only Saturday was going to be bad with it clearing up early Sunday morning for the ride. Of course the forecasts were all wrong and there was a light on and off shower with about an hour to go which turned into a good downpour about 30 minutes before the start. It finally stopped, or at least slowed down with about 10 to go, so the organizers pushed the start back a half hour to allow some of the water to run off. After all we would be descending out of the gate with wet brakes so no need to add lots of run off to the mix as well. 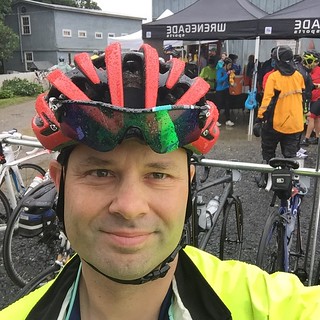 At 9:30am we were off and lead out by the Colavita | Bianchi womens professional cycling team along with pros Tim Johnson & Lyne Bessette. The start was a bit wet but mostly uneventful and we faced a drizzle to light rain until the first rest stop at Pierson’s Farm at about mile 15. Here the treat was some pound cake along with an assortment of GU products, bars and drinks. After a nature break I was off again on segment 2. The rain had died down and there were periods of dryness where I could unzip my rain jacket a bit on the climbs to get a little cool air on me. The temps were in the low 50’s according to my Garmin so having the rain jacket on was a little blessing also keeping the wind at bay. Despite rain and temp I was feeling pretty good with the exception being my feet. My shoes and socks were soaked before the first rest stop, but there wasn’t much I could do and after a while I didn’t even notice it any more. *Note to self: get a pair of overshoes!

Before I knew it I was at the second rest stop at Soons Orchards. This segment, which included a RWGPS timed climb, seemed to go by quick. I was just at the 2 hour mark so I was making decent time. Today certainly wasn’t about being fast, but more surviving to the end. Here they had some tasty apple & raising turnovers as well as all the other usual rest stop fare. Not wanting to waste time I had a snack and I was off again. I think this was the rainiest segment of the day as the skies opened up just after I departed and there was a good steady rain for at least half of segment. I wish Oakley would come up with a pair of glasses with a windshield wiper. 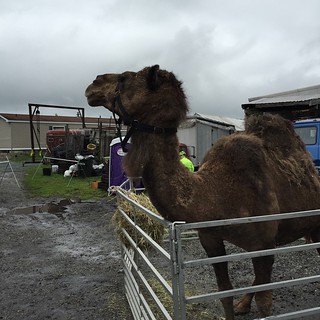 Once the skies let up there were some beautiful views to be had of the farms and surrounding mountains before I found my way to the 3rd and final rest stop of the day. I would now find myself at Rogowski Farm along with a camel names Gabby. No, she wasn’t riding the route but the mascot of the local cycling club is a camel so she was there flying the locals flag so to speak. Of course there were plenty of tasty goodies here as well such as a tomato caprese and some apples from Soons Orchard. After topping of a bottle with some Skratch mix and downing a few caffeinated cola flavored Honey Stinger chews I was off for the final leg of the Fondo. The skies had finally cleared up and the sun even started peeking in and out. With the jacket unzipped (not very aero!) I began the ascent to the Cedar Lakes venue. I passed a few people early on and then I was mostly alone for the last 10 miles of the ride. As I passed the 3rd and final RWGPS timed climb I knew I only had about 3 miles to go. I was in and out of the saddle as the gradient increased and passed a couple who had decided to get off and walk. As I reached to the final intersection before I made the turn into Cedar Lakes the road pitched into double digits, dancing on the pedals I made it to the top and turned into Cedar Lakes. I thought I would finally be able to recover a bit before the finish about a half mile away but I was wrong. According to my Garmin it’s an 11% grade most of the way to the top so I just sat in and spun my lowest gear until things leveled out towards the finish and finished strong where the finishers were greated by race volunteers and awarded their finishers medal – which in this case was a branded wooden spoon on a lanyard. Very fitting for the event. 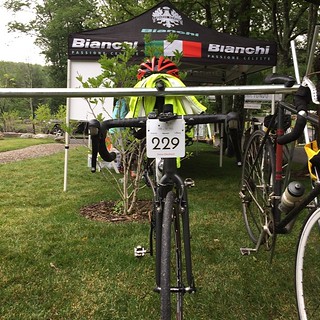 Once I got off my bike and got out of some of my wet gear I was treated to some excellent BBQ which was available to all the participants. I especially liked the spicy fried chicken but the pulled pork was quite tasty as well. The was also some fresh salad, corn on the cob, potato salad a couple of other things I’m forgetting. Basically you were not going to go home hungry.  I sat around for a little while chatting with some other participants as I enjoyed the ambiance of the pavilion which had a nice fire going in the center of it. I could of sat around all day there but I still had some wet kit on and I needed to get back on the road for the 1.5hr ride back home – which turned into about 2 hours thanks to bridge construction!

Overall it was an excellent event despite Mother Nature throwing us a curve with the weather. I’m already looking forward to next years event! I’d recommend this to anyone looking for a well produced event featuring some of our local farms, beautiful views and lets not forget the challenging routes!